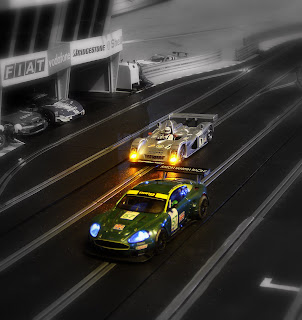 Endurance Racing makes a spectacular comeback on the all new CWM Interlooper circuit. Over 16m of high speed banked oval with twisting chicanes make this a challenge for any driver. Add in the race management software that can be fully customised for every car and the stakes get even higher. Every decision can win or lose the race; run heavy, pit early, fuel to the max, block or charge? Anything can happen, and it's never over till the chequered flag falls - unless you miss that pit stop, in which case you'll be high and dry!
Posted by MyWarren at 9:50 pm No comments:

Just pleased to see you?

Big Bunnies are obviously en vogue at the moment. Thanks Claire for these two news stories from the Daily Mail. 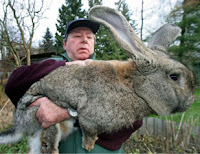 Although the Koreans are keen to tackle their problems of malnutrition and food shortages it seems that these giants may not necessarily be the solution as they don't actually "breed like rabbits".

~ the essence of rabbit ~ 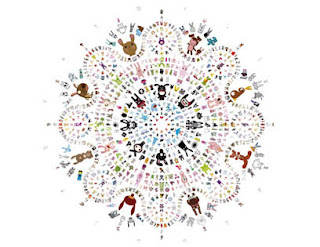 visionary work by pictoplasma
Posted by MyWarren at 10:58 pm No comments:

That Was The Week That Was

Possibly one of the most underpublicised events in recent times almost slipped me by (thanks Claire)!
National Rabbit Week this year focused on dietary problems for bunnies. Not least of which surely is the revelation from the website that rabbits produce two types of droppings, the first of which they re-ingest. Nice.
Posted by MyWarren at 1:53 pm No comments: 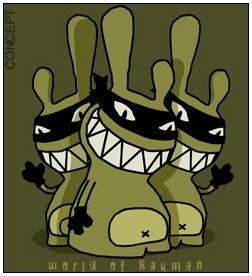 Cute and cuddly, they are not.

They are hell bent on ruining Rayman's day

(with a pinch of world domination via clever merchandising)
Posted by MyWarren at 9:02 am No comments:

Always ready to do a good deed, the little cartoon rabbit scooted up with an extinguisher to put out a fire. But when he sprayed the flames, they exploded into a conflagration, burning him to a crisp and leaving only his signature sunglasses intact.
Suicide Rabbit, China's whimsical Everyman, was the fall guy again, victimized this time by rapacious merchants -- seemingly ever-present in this country -- who sold him an extinguisher with chemicals that fed the fire instead of putting it out. It was another telling episode in the life of a long-suffering cartoon character who has captured the imagination of many of China's 137 million Internet users.

Suicide Rabbit, introduced in August by Liu Gang, a 35-year-old cartoonist, has attracted a swiftly increasing audience by portraying with gentle humor the million little abuses suffered by Chinese people as their society endures a bumpy transformation. Hapless but always well intentioned, he has provided a rare opportunity for Chinese young people to see someone poke fun at the small-scale venalities and social ills they encounter every day.
In a country where the censored press and television news hammer audiences with a relentless diet of success stories and new achievements by the Communist Party, Suicide Rabbit has become a sensation for daring to suggest, even faintly through tiptoe satire, that the society created by China's economic boom has its comical drawbacks.
Through Suicide Rabbit's adventures on the Web, Liu has mocked President Bush, showing him as a grotesque Statue of Liberty leading a legion of little rabbits toward a smoking Iraq. He also has pooh-poohed Japanese products sold in China, suggesting that cars from Japan collapse in the street. But he has carefully steered clear of China's own leaders or party politics, which are taboo subjects for satire under the strict supervision of official censors.
So the sympathetic little rabbit gets cheated by Japanese cosmetics firms -- their products turn his face black. He gets pushed around by low-level Beijing officials who don't want people to stop spitting because it would cut down on the income they get by imposing fines on spitters. He gets crushed by a giant roller that is destroying pirated DVDs to the cheers of officials nearby. And when he goes to the hospital, his intravenous drip gets diverted through a tube leading to a bottle marked "commission" while a greedy doctor looks on.
But he never runs into one of China's many corrupt party officials or wonders why the country's leaders are unwilling to subject themselves to popular election. Similarly, he plays the role of a woman roughed up during an anti-government demonstration in Taiwan but never of a Chinese farmer fighting riot police after having his land seized and sold to real estate developers.

"There are some topics we can't touch," Liu said in response to a query from an Internet reader.
"This rabbit only eats grains and carrots; he's not offensive," Liu said. "He's kind of like a small, unimportant character in the society. A character like that can gain a lot of sympathy."
Liu, who signs his work "You Shou," or right hand, patterned Suicide Rabbit on a character created by the British cartoonist Andy Riley, author of "The Book of Bunny Suicides." But it was not copying, he stressed, because he changed the rabbit's looks and personality drastically and put him into vastly different situations to attract a Chinese audience.
Liu has migrated toward social themes in the Suicide Rabbit cartoons. In particular, he has started emphasizing the frustrations of many Chinese at the money-grasping attitude that has emerged since the country started moving toward a free-market system 25 years ago.
"By reflecting current issues, I get more recognition from young people," he said. "They are the ones who read new things online. They are the ones who like cartoons. They are my target audience."
By Edward Cody
Washington Post Foreign Service
Friday, January 26, 2007
Posted by MyWarren at 10:44 am No comments: