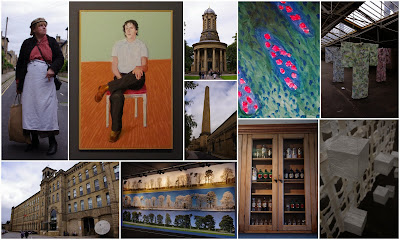 On Friday we left Calverley and visited nearby Saltaire. The model town was founded in 1851 by Titus Salt who wished to provide a clean and efficient base for the community employed in his woollen mill. Our tour guide gave a superb description of the town and its people under the domain of Titus Salt. Whilst they were well cared and catered for, they did have to pay for those privileges, however it was the patented manufacture of Alpaca cloth that secured Salt's fortune. However, even his extraordinary wealth could not ensure the future of the town indefinitely. After he died the mill ran for several decades before being abandoned in the late 20th century. A local entrepeneur, Jonathan Silver, then bought the site and working with artist David Hockney created a gallery space like few others. The town is now a UNESCO World Heritage Site.
Posted by Laconic Lagomorph at 12:00 pm No comments: 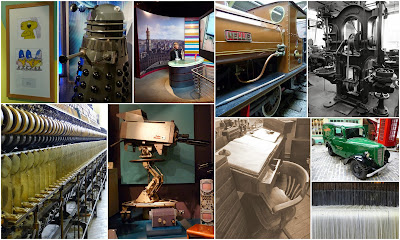 On Day Four we headed West and visited the Media Museum in Bradford. This museum, also free, has 5 floors of fixed and changing exhibition space devoted to all forms of media from the last ten decades. Hands on displays allow visitors to practise reading the news, film in front of a blue-screen and try mixing the results. Also the BFI archives can now be plundered; book a free booth and sample delights such as Mr Ben, Think of a Number, Hancock's half hour and many more!
This excursion left us very little time at the end of the day, thus half an hour was really not enough time to do justice to the Bradford Industrial Museum (also free) which can be found north of the city.
Posted by Laconic Lagomorph at 12:00 pm No comments: 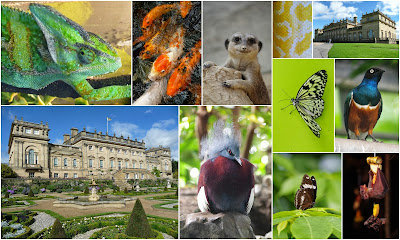 On Wednesday we parked near Roundhay Park in north Leeds and visited Tropical World. This unremarkable series of buildings actually has quite a nice variety of animals including butterflies, reptiles, birds, fish, bats and meerkats. They could do with spending a few extra pounds to tidy up some of the vivariums but this was still a pleasant distraction for at least a couple of hours. In the afternoon we headed to Harewood House which has very nicely restored state rooms and grounds designed by Lancelot 'Capability' Brown. In the evening we met my parents who joined us at Calverley to stay for the remaining two days and nights.
Posted by Laconic Lagomorph at 12:00 pm No comments: 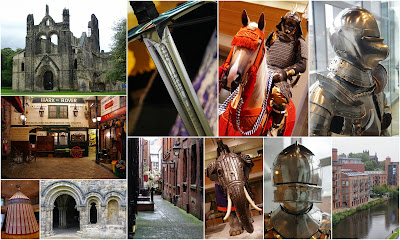 On Day Two we headed back into Leeds via Kirkstall Abbey. The nearby museum had an interesting Victorian themed set with shops and the like. The abbey itself was obviously none the better after Henry's Act of Supremacy. The weather too meant we didn't stay too long but headed into Leeds where we found the Royal Armouries. This is an excellent free museum with large exhibition spaces devoted to armour from all parts of the world. The Hall of Steel, armour-plated elephant and an exhibition of weapons from The Hobbit film were all highlights.
Posted by Laconic Lagomorph at 12:00 pm No comments: 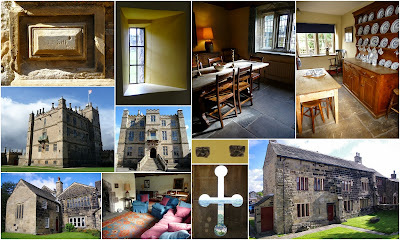 We headed North via Bolsover Castle (Eng. Her.) and arrived at Calverley Old Hall (Landmark Trust) which was to be our base for the week. The mediaeval hall was acquired by The Trust in its entirety such that they were able to restore the main hall and provide accommodation for five. The adjoined old chapel and Solar are still unrestored awaiting future decisions about how they can be included in the property let.
In the evening we went into Leeds for the obligatory Pizza Express followed by a film, 'Rush', at the local Everyman. This is an treat that is highly recommended. It's a cinema experience like few others; double seat sofas, leg room aplenty, it caters for wine drinkers and pizza eaters with nairy an obnoxious teenager in sight. Truly a Picture Palace for grown ups!
Posted by Laconic Lagomorph at 12:00 pm No comments: 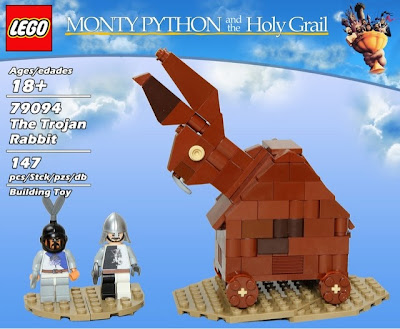 Posted by Laconic Lagomorph at 10:48 pm No comments:

Posted by Laconic Lagomorph at 7:34 am No comments:

Posted by Laconic Lagomorph at 9:00 pm No comments: