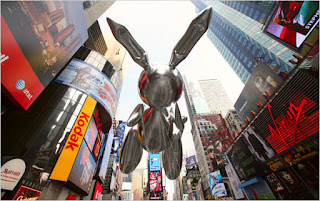 Drifting above Broadway during one of the sunnier Macy’s Thanksgiving Day Parades in recent memory, Jeff Koons’ big silver “Rabbit” balloon sort of looked like art.

Floating overhead yesterday, it was a jubilant reminder of the way contemporary artists dip in and out of mainstream life, effortlessly working high, low and in between. That is where the latest, biggest “Rabbit” is suspended, and where it will stay. Owned by Macy’s and slated to fly in future parades, it will not be turning up at auction any time soon.

Jeff Koons (born January 21, 1955), is an American artist. He is noted for his use of kitsch imagery using painting, sculpture and other forms, often in large scale. Born in York, Pennsylvania as a teenager he revered Salvador Dalí. His work includes statuary such as "Michael Jackson and Cuddles" which sold for for over $5M in 1991 and "Puppy" which was purchase by the Guggenheim Museum Bilbao in 1997
Posted by Laconic Lagomorph at 12:27 pm No comments: 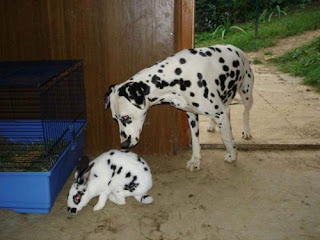 Posted by Laconic Lagomorph at 12:20 pm No comments: 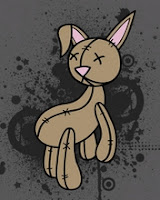 Two thieves who ran off with a handbag from a woman waiting for a train ride in Baden might end up as the biggest joke in the underworld once they find out that their loot contained nothing but a dead rabbit. According to Hilda Morgenstein, 42, she was waiting for a train ride with her daughter which would take them to the countryside where she intends to bury her pet rabbit when the muggers attacked. "They saved us the trip," a shocked but elated Morgenstein said. "I told my daughter they were angels and were taking bunny to a better place." Although nothing valuable was lost in the unusual heist, police are still conducting search for the pair and the remains of the bunny.
Posted by Laconic Lagomorph at 12:15 pm No comments:

HEMA is an international retail organisation with stores in the Netherlands, Belgium, Luxemburg and Germany. Customer-friendly and with a unique profile, HEMA distinguishes itself from other retailers by selling its own brand. In addition, HEMA develops its own assortment and likes to surprise customers with timely offers of products for daily use. HEMA products are typically convenient, practical and attractive and of good quality
Posted by Laconic Lagomorph at 11:15 pm No comments:

Updated with new photos from Kenilworth Round Table Fireworks Display, 2007

Posted by MyWarren at 7:00 pm No comments: